Delivering value to your customer 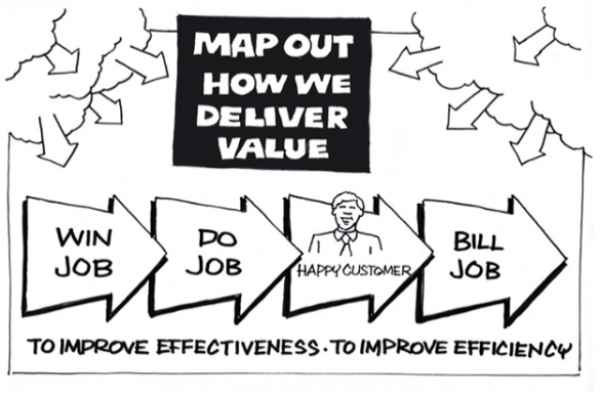 Have you ever thought about who, when and why the traditional “picture” of an organisation, the family tree, was first invented?

To this day, the focus of the organisation chart remains control; that is, to ensure people do their jobs and do them properly.  Over a century and a half later and we are still employing the same thinking!

Additionally, as noted by Prof. John Seddon, “if we design work into functions and give each function its own target, should we be surprised if the functions don’t co-operate with one another”.

That’s not to say that the organisation chart is without merit but research has suggested there is a better diagram which supports a more enlightened approach delivering a more sustained performance.

Traditionally businesses are compared to well-oiled machines but we believe a better analogy would be an organism that will survive or thrive according to how well it performs its sole function: to find, keep and profitably serve its customers.

The question that needs to be asked throughout the whole life of any business is “how do I “systematically” give my customers the best results?  The results of the business need to become “system” dependent not “people” dependent.

Work can then begin on examining the parts of the system so that cost and waste are reduced and effectiveness and efficiency is increased.  Where required, codifying these processes as part of the relevant ISO management system or book of best practice.

The resulting book of best practice says “this is how we do things here”, without which everybody will do things differently.

As an example, we are now going to see how this thinking was applied to a real company …they:

A workshop was held with key staff starting with the above ideas and the following Core Activity Map™ was developed:

As a result of this new view of the company a number of significant organisational changes resulted:

1) The UK manufacturing facility had always previously been regarded as a “core” process, however, as the company were in effect a sales organisation and whilst all of the intellectual property (IP) belonged to the company many of their products were actually made abroad.  As a result, the manufacturing function was now treated as any other external supplier.

The benefit from which was for the first time the staff responsible for the activities actually took part in the documentation of them.  This time they were their systems; there was real ownership.

3) Most importantly, prior to this process the design had always emphasised technical excellence.  As a direct result of the new focus on making products for contractors so that they are “quicker and easier” to install, additional design expertise was developed to meet this objective.  The focus on technical emphasis remains but in addition to which there is now a real focus on making it easier and quicker to install the products for the contractor base as this factor was considered to be the critical “order winner”.

The benefits of adopting this Core Activity Map™ approach included staff being considerably more focused on what exactly it was that “won orders” from contractors.  This in turn resulted in the ability to increase price for the improved convenience and a surge in both orders and customer satisfaction levels.

The benefits of an associated and robust book of best practice included: