Getting staff to take responsibility 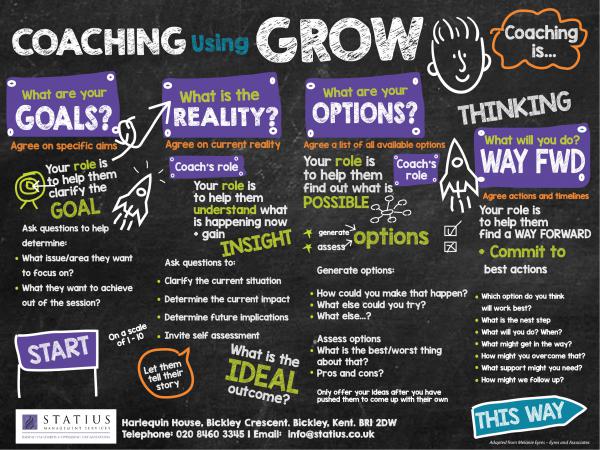 It has been said that the most important job of any manager or leader is to grow their staff …and even their successor!  Additionally, if you are an entrepreneur or business owner you actually make your business significantly more valuable if you grow your team, in effect, to make yourself redundant!

But how do you do this, what’s the process?

One process, I’m not saying it’s the only one, is to grow your people, getting them to take more responsibility and this can be done using a model with the acronym GROW.  Now, I’ve known and used the GROW model for some time …what I didn’t know …was it was invented by a racing driver!   A feller called John Whitmore who had a burning ambition to drive in the prestigious, but brutal, 24 Hours Le Mans endurance race.  He turned out to be pretty good; in fact, probably, one of the most talented drivers of his generation. He won the British Saloon Car Championship in his first year, he won the European Touring Car Championship and he actually drove at Le Mans five times between 1959 and 1966.  At which point he decided to leave racing. Oh, and at some point along the way he got Knighted so became Sir John Whitmore!  How impressive is that?  Very cool.  So it was him along with a couple of others, a guy called Graham Alexander and another, Alan Fine, that invented the GROW model.

But a reasonable question at this point is:

What’s the difference between training and coaching?

The GROW model is a simple and elegant way of structuring a coaching conversation; as a result, it is become one of the most celebrated and well-used coaching models, where GROW stands for:

…but before we dig into the model let’s take a quick peek at a few of the fundamentals of coaching.

If, as a leader, you subscribe to the view that one of your most important roles is to coach your people to do their best then a few coaching basics include:

In entering into a coaching relationship, the aim is really to help them make better decisions, solve problems that are holding them back, learn new skills, and otherwise progress their careers.

How to Use the Model

There are a couple of accompanying downloads, one of which outlines the model and can be used as a ready reference and another which details a more comprehensive question set than that outlined below.

The focus is on asking questions, rather than providing answers, and the model is made up of the following four stages of questions:

Step 1. What are your Goals?

Ideally, where possible (it isn’t always), it’s good to make the goal SMART goal; one that is Specific, Measurable, Attainable, Realistic, and Time-bound, but sometimes, especially with behavioural goals, this is less relevant

When setting goals, it’s useful to ask questions like:

Step 2. What is the current Reality?

Establishing the current reality is a critical step, as all too often, people try to solve a problem or reach a goal without fully considering their starting point … and if the starting point is not considered:

2) you’ll often miss information that you need in order to effectively reach the goal.

So, the coach should get the subject to describe their current reality, any actions taken so far and the impacts any of those actions have had.  Essentially, this step is about understanding the obstacles preventing or limiting progress.  As you have the conversation about the current reality solutions often begin to emerge.

Useful coaching questions at this stage include:

Step 3. What are your Options?

It’s now time to determine what is possible; this is an exploration, possibly a brainstorming, of all the possible options for reaching the goal.

The difference between training and coaching is critical here.  If the coach offers all the options the process becomes training; to remain coaching the team member needs to come up with ideas themselves; they need to put their grey matter to work.

That’s not to say you can’t offer your suggestions, but it’s essential to get the team member to deliver first; It’s important to guide them in the right direction but without actually making decisions for them.

Typical questions to use at this stage might be:

Step 4. What is the Way forward?

Having gone through the previous steps the staff member should now have a much better idea of how they might achieve the goal.  Progress should have been made … but is it enough? The final step is to get them to commit to specific actions in order to move forward towards the goal.

In order to get the best results, we’d advocate regular coaching sessions to review progress, the frequency and duration of which would depend on a number of issues, but typically; what specifically is being coached and the seniority of the person being coached.  However, coaching can be a one-off event but, to get best effect from the session, there should always be a follow up to ensure that objectives are reviewed and evaluated; to ensure that the result obtained is the desired result.  This will also provide some accountability and allow them to change their approach if the original plan isn’t working.

In order to flesh the model out in a bit more detail we have created an example below.

Jackie works on the breakdown desk for an engineering company with about 500 engineers working across the UK who travel the UK to mend equipment on clients’ sites… and she has the goal of wanting to be promoted to a team leader in 2 years.

This is Specific, Measurable, Attainable (she’s being in position for a couple of years and as the company expands there are expected to be further team leader vacancies), Relevant (both to Jackie’s aspirations, the team’s goals and the company’s expansion plans), and it Time-bound.  This is a SMART goal.

You both look at her current reality. She’s not new to post, but equally not a long-timer, she already has a number of the skills required and, with her, you brainstorm the additional skills that she’ll need in order to be successful. She needs:

You then review the options available for her to get the necessary experience, she could:

Finally, you establish the way forward and the will. As her manager, you offer to let her lead a small team on a minor project. If she performs well, she can take on additional projects, shadowing engineers and then a supplier secondment.  Finally, you then agree a monthly 1 hour coaching session with a half day review every three months’.

Coaching is a great tool for an experienced leader to easily, effectively, and usually, comparatively inexpensively, transfer their knowledge, experience and wisdom in order to grow the capabilities, roles and responsibilities of the people in their team.

Additionally, the deceptively simple GROW model (invented by a speed demon racing driver…what could be cooler than that) is a great tool that works across all disciplines and cultures, for structuring questioning conversations that grow the confidence, capabilities and competence of staff.

The GROW model helps you help your staff take responsibility for their actions and development.