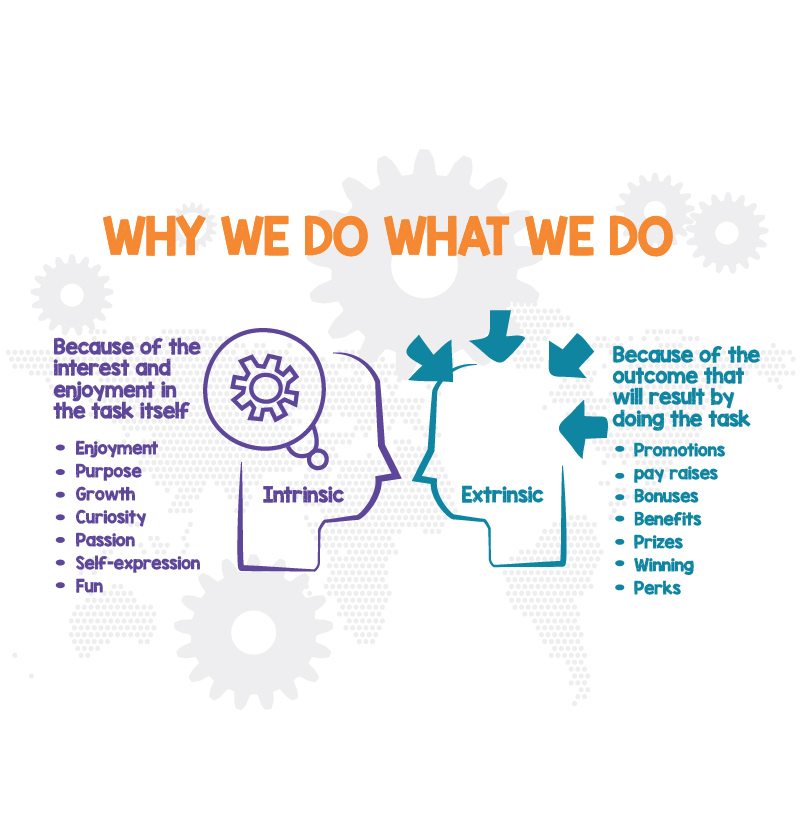 As you know one of my favourite management thinkers is a guy called Deming, in his book The New Economics he develops a diagram (page 122) that shows what he calls “the forces of destruction”.  These forces rob people of creativity and innovation.

He argues that people are born with intrinsic motivation, self esteem, dignity, curiosity and an innate joy in learning and that these positive forces are, over a lifetime, gradually eroded and ground down by the systems that we have created both at school and at work.

These forces of destruction include:

The result is we play to “win”; we play to be the “one” that gets the “prize”, all at the expense of creativity, teamwork and the idea of collectively working together to find ways of doing a better job.

There is a better way, one where we release the power of our people…

The role of intrinsic and extrinsic motivation

Intrinsic motivation involves performing a task because it’s personally rewarding to you.

Allied to this is the work of a guy called Douglas McGregor who, mid last century, developed his Theory X, Theory Y view of people:

Theory X is all about “control” and is based on the assumptions that most people:

In contrast, theory Y is all about an attempt to align company and individual goals to “something worthwhile” and is based on a more positive set of assumptions.  Essentially, that most people:

Many Leaders and managers adopt the “carrot and stick ” approach: Do as I say and you’ll get a pat on the back, detract from that and you’ll get kicked a little lower down.  However, adopting this approach, moves the goal from the inate internal desire “to do a good job” to the drive for praise, recognition and reward.   As a result, the way in which management is often executed means that the potential of people to reach their potential and contribute meaningfully to their own and your company goals, is, at best, only partly fulfilled.

Dan Pink is probably the most prominent advocate in this area (interestingly, he’s an ex speechwriter Al Gore). He builds on McGregor’s work and that of others, principally, psychologists Harry Harlow and Edward Deci and in his book “Drive” he describes three stages of motivation:

Pink goes on to suggest that intrinsic motivation is based on three key factors: autonomy, mastery and purpose. Let’s take a peek at each:

Autonomy is about having a say about what you do and how you do it. Autonomy allows space for each of us to think creatively without having to conform to workplace rules.  The pandemic and working from home (WFH) has necessitated the need to rethink our ideas of “control”, hopefully for the better.  Gone, or at least reduced, are many of the controls around regular office hours, dress codes and rigid regimes, but depending on your current situation, that degree of control may yet need to be further reduced in order to increase autonomy, whilst building trust and improving innovation and creativity.

Mastery is about becoming the best you can be, inherent in which is the desire to improve. Here there is a crossover between the work of Pink and of Carol Dweck (A professor in psychology at Stanford) who outlines her research around the idea of fixed and growth “Mindsets” in her book of the same name.  Mastery requires a growth mindset where you see your potential as unlimited.  At your core you will want to learn in order to better do what you do.  People seek mastery for its own sake.

I doubt any elite athlete is predominantly motivated by the trinkets that come with success (medals, cash, celebrity, status) their motivation is to be the best that they can be.  The trinkets are a “by product” in the quest to “be the best”.  In the world of business this goal is often labelled as the (elusive) goal of continuous improvement.

The idea of purpose also intersects with ideas around corporate social responsibility (CSR) and environmental, social and governance (ESG).  And doing good deeds doesn’t have to be the preserve of big companies.  The little guys can do good stuff too even if it “just” clearing litter, helping at the local old people home, volunteering at a neighbouring school to help with reading.

We have also looked at the work of Simon Sinek in previous blogs and his work fuses delightfully with Pink’s around the idea of purpose.

A company purpose is something that allows the energy of people to be harnessed to something larger and more important than themselves, or indeed, the company.  So, encouraging your people to find purpose in their work by connecting their personal goals to your organisations goals is likely to engage them, resulting in more productive and hard working people doing the right thing.  Purpose is about winning both hearts and minds.

So, if we want to build an internally motivated team what are some of the steps we might take?

Give up control, allow autonomy

Essentially, people are significantly more engaged when they pursue goals and activities that they’ve helped to create.

Chunky challenges are what others have called “Goldilocks tasks” projects, objectives and tasks that are, like the porridge, “just right” neither too hard nor too easy.  They are usually team based projects that encourage different people to focus on skills that allow them to nurture the things they want to master.

These tasks might also be called stretch goals, ambitious targets that challenge what people deem possible. They should stretch your team members and enable them to develop their skills.

Chunky challenges will need the team to develop and set clear goals around a particular objective.  Depending on the seniority of the team, it could be the senior team developing the 5 year plan or the annual plan, it could be a more junior staff developing a specific project as part of the company’s 90 day plan.  Whatever it is it (ideally) needs to align with the overall corporate objectives.

In adopting a collaborative cross skilling approach you are broadening the skill sets and embedding a more holistic and understanding culture.

Motivation and the leader

Leaders and managers need to ensure that each activity and task is seen as a component in the system that works in cooperation with both the preceding and following stages.  And that the aim of the system is to deliver on the company purpose.  It’s absolutly not about “pleasing the boss”, it’s about making the work slicker and faster and pleasing the next person in the organisational chain that takes delivery of your work …ending with, and satisfying, the customer.  The customer being the most important part of the process.  This means that in order to for the system to work at optimum levels some parts of the system may need to be sub optimised.  The fallacy of much of today’s thinking is that all teams and departments should all be working at 100% all of the time.

People are different and a manager should understand that part of their job is to create an interest and challenge in work – enjoyment at work for everyone.  Ranking people, as many appraisal systems do, is something that even a qualified psychologist would struggle to do, so quite why busy and stressed managers buy into the idea is completely unfathomable!

Leaders need to be open minded and ready to be challenged, as a fella called General Leslie E Simpson said in 1936; “If you cannot argue with your boss he is not worth working for”

In the end leaders and managers are coach and council… not judge.

And in a complex and changing world the more elegantly we can harness our people’s talent to the aims and objectives of our organisations, the happier we will all be.

If you can get this right, Deming would argue, would be greater creativity, innovation, expansion of markets, better service and a more rewarded and rewarding work experience.  His goal was to help leaders that are interested, create for their people, both joy in work and joy in learning.  What could be more glorious?