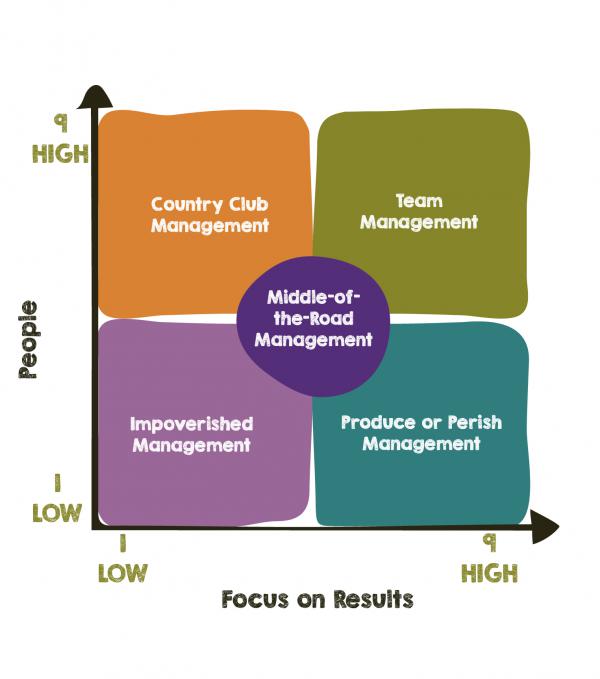 Whilst the Blake Mouton Management Grid, also known as the Leadership Grid, was developed in the early 1960s by management theorists Robert Blake and Jane Mouton it is just as relevant today. It plots a manager’s or leader’s degree of task-centeredness versus their person-centeredness.

The model uses a four box, two by two grid based on two dimensions:

As a result of which, Blake and Mouton identified five leadership styles and gave them some really great names, as illustrated in the diagram above.

Let’s take a peek at each quadrant in detail.

The low results / low people quadrant was given the great name of “impoverished” (sometimes indifferent) management as with a low regard for creating systems that deliver results and little interest in creating great team environment; in most instances this will be the most ineffective place on the quadrant; the likely output is disorganisation, dissatisfaction, disharmony and a pretty ineffective operation.

The equally brilliantly named “produce or perish” management, to my mind reminiscent of the Jack Welsh approach, is also understandably known as “authoritarian”.    Leaders in this quadrant believe that their team members are simply a means to an end. They probably subscribe to McGregor’s Theory X approach to motivation, which assumes that employees are naturally unmotivated and dislike working. The team’s needs are always secondary to whiplash of productivity.

These managers are autocratic, have strict work rules, policies and procedures, and often view punishment as an effective means of motivation.  In some circumstances, this approach can drive impressive results initially, but low team morale and motivation will ultimately affect people’s performance and this type of leader will usually struggle to retain high performers.

As an example, my wife used to work in the HR department of a major investment bank.  There were 40 people in the department and astonishingly after just one year of service she was the longest serving!  Everyone recruited before her had left, as she did not long after.  This was the HR department!  They should have known better! It was a totally toxic high-pressure environment that cost the bank a fortune in recruitment fees alone.

This is the tries to be “all things to all people and succeeds at none manager”.  The Middle-of-the-Road or “status quo” manager tries to balance results and people, but compromise is tantamount to sacrifice…on all fronts, so this approach is rarely as effective as it may initially appear. With this approach you will fail to inspire high performance and also fail to fully meet people’s needs. The likely result is at best mediocre performance.

Great name number three is Country Club management, sometimes called “accommodating” management is where the leader is focused on the teams needs and feelings to the exclusion of results. The assumption is that as long as the team are happy and secure, they’ll work hard.  However, the tendency is to drift into a work environment that is fun and relaxed but where productivity suffers because there is a distinct lack of direction and control.

The final section on the grid is where managers have a real stake in the organisation’s success and are completely committed to their peoples’ needs.  The people AND performance both matter and dovetail. An environment is created based on trust and respect, which leads to high satisfaction, motivation and excellent results. Team managers more likely adopt McGregor’s Theory Y approach to motivation – People want to work to do a good job.

According to Blake & Mouton team management is the most effective leadership style. The leader is serious and passionate about their work but they also do the best they can for the people they work with.  These managers commit to the organisation’s purpose , mission , vision and goals AND motivate the people who report to them.  They work hard on themselves and the team to ensure everyone is stretched to deliver great results.  At the same time, they’re inspiring and using the company’s purpose, mission, vision to inspire the march towards a better future.  People led by team manager’s see the bigger picture and feel respected and empowered and, as a result, they are committed to achieving their goals.

But that’s not quite the end of the Blake and Moulton story.  Following Mouton’s death in 1987, Blake and others added two more leadership styles.  I’m not psychiatrist, but I would guess there are some deep-seated issues going on with these types of managers, neither of which can be easily placed on the gird as you’ll see.

Paternalistic Management. A Paternalistic manager hops between the Country Club and Produce-or-Perish approach. One minute this type of leader is supportive and encouraging but the next they can turn on a sixpence and aggressively guard their turf.  Additionally, it is not uncommon for the paternalistic managers not take kindly to anyone questioning the way they think.

Opportunistic Management doesn’t appear on the grid because this approach can show up anywhere on it. Opportunistic managers are only interested in their own needs, they’ll shift around the grid adopting whichever style benefits them most at the time. They’ll manipulate and take advantage to get what they want.

As we saw from the Situational Leadership – TO DO blog, no one style is best for all situations, a fact to some extent also reinforced by the Blake Mouton Model.  It would be foolish to neglect either tasks or people.

This model, like others, helps leaders and managers to think about their leadership style and its effects on their team’s productivity and motivation.  By comparing and contrasting a managers “concern for performance” against their “concern for people,” the Blake Mouton Model highlights how placing too much emphasis on one area at the expense of the other can lead to poor results.

The approach balancing the management of both “concern for people” and “concern for performance” is considered to be the most effective. However, there are some caveats, some situations do call for a bit of flexibility, for example, if your company is in the middle of a significant change then it can be acceptable to place a higher emphasis on people than on results in order to guide and reassure them through a potentially difficult time. Likewise, when faced with an emergency, a market or economic crash, or a physical risk, concerns about people may be put to one side in order to simply survive.

The model discourages the vague, wishy washy, middle-of-the-road compromise and suggests that when there is an equal and balanced focus on both people and results; on engagement and productivity the results are more likely to be excellent…