Master your measures …and predict the future! 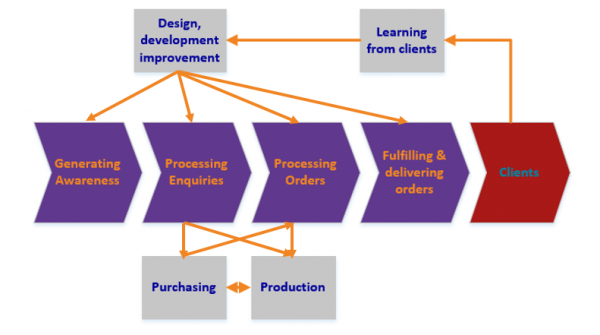 I first came across this approach to looking at data when I was undertaking a Master’s degree with the World’s first Professor of Quality Management, a great guy called John Oakland. Now, I believe, this thinking and these tools and techniques are so powerful, and so under-utilised, that if I didn’t have a mortgage to pay, I’d coach leaders and managers in them… for free … and until the end of my life!

In the last blog we looked briefly at the theory of these charts; today we are going to dive into a couple of measures taken from a real-life company example referred to in a previous blog; as a reminder the company:

• Is a manufacturer and distributor of electronic products which control the environment (temperature, humidity etc) of offices and workplaces
• Have a turnover of £6m which they are looking to grow to £10m over the next 3 years
• Export 60% of the products abroad
• Have around 40 staff, the majority in the UK

In the previous blog we looked at how they deliver value to their client base and with them we developed the following Core Activity Map™ which we are now going to link to a couple of process measures:

But where should we start?

We start from the outside and work in … as such, the question we ask is what is it that the customers see?

In this instance, there are two parts of the process where the customers can peer into company processes, so where we need to measure “hard” facts, figures and results:

We are going to look briefly at the on time delivery data which is shown below. You’ll notice that by taking this longer term “movie view” of data, as opposed to the more usual “snapshot” view, we can see the performance over a 7-8-month period and in the middle the performance improves for a brief period then reverts. This is a significant process shift which, because data was presented in tables, was completely missed. But I want to explore a similar shift but for a metric usually much closer to a leader’s heart.

In the first chart below you can see the plot for the overall monthly margin for the last two years or so.  The average is around 52% but the data actually wibbles and wobbles a bit around this average.  The high point being nearly 58% in the first December.   The question is …whilst this number is the highest seen for some time is it actually special in any way?

We can very easily add in the limits to the range of variation as seen from the green lines in the chart below.  The first December level appears above the limits so there is a good chance that it is “special” in some way.  However, what was missed, because at the time the company were working off tables of data (where it is impossible to see trends) is that for a number of months all of the data points (from the second January until the second August) were all below the long-term average.  (See the points in red below).

We can then utilise another feature of these charts to recalculate both the limits and the average for this period as it looks like there is something fishy going on.  This is confirmed in the graph below.  For that eight-month period the margin did indeed drop.

However, after August it reverted to its original pattern.  Upon investigating it appears that for the 8-month period the margin deteriorated as a direct result of currency fluctuations.  This was completely missed by the then method of looking at data on a monthly basis.

Additionally, you’ve also probably noticed that both December figures are high.  This was because on a monthly basis the FD assumed that all of the distributors hit all of their targets and that maximum commissions would be paid.  As this rarely occurred at the end of their financial year (December) these accruals were added back into the accounts which had the effect of increasing the margin for that month!

Lastly, as can be seen from the final chart we can also add in dotted lines showing the predicted future limits.  Yes, we can predict the future.  If nothing changes, we would expect all future results to fall between the limits.

However, if, as leaders and managers, the limits are not to our liking (as is very often the case) then it our job to improve the process.

Improving the process means changing it so the upper and lower levels are closer together (the process becomes more predictable) and to move the average up if up is good… sometimes up is bad … think debtor days or accidents!

We have only taken a couple of measures, on time delivery and margins but this thinking can be applied to any measure you want to review over time; minutes, hours, days, weeks and months; for instance:

These ideas to can be employed to transform our thinking and the way in which we manage our organisational processes and deliver real, sustainable and properly quantifiable improvement.