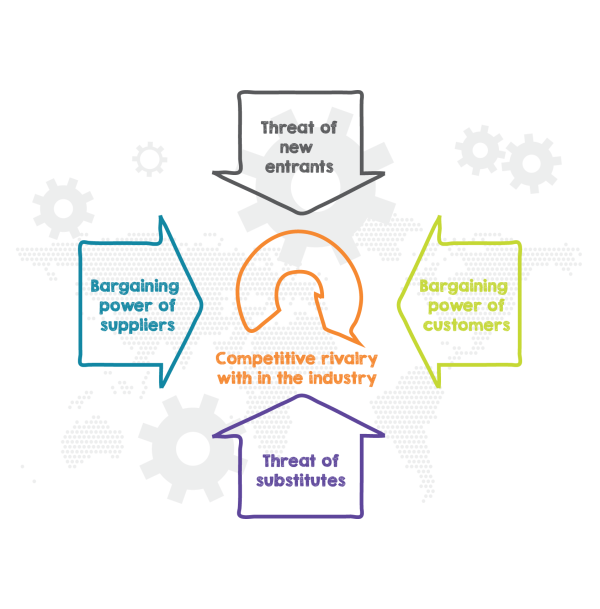 When to use it

Porter analysis, also called the “five forces model”, is another tool for analysing the external competitive environment a business faces, but whereas PESTEL works at the macro-environmental level (things can’t be controlled by the company), Porter analysis works at the micro-environmental level, where, very significantly, given the company has long enough time frames and deep enough pockets, a far greater influence can be exerted.

I think most readers will have heard the term “competitive advantage”, well the guy that coined that phrase was a then young Harvard Professor by the name of Michael Porter who then went on to set up a consultancy practice and write a number of books about the subject.  So, he was obviously, young (just 32 when the model was first published in Harvard Business Review – a great read by the way), bright, rich and good looking…who says you can’t have everything!

What I didn’t know until I started researching this article was that the model was developed in reaction to the SWOT analysis which, apparently, Porter found ad hoc and therefore lacking in rigour.  Our thoughts have always been that the outputs from both the PESTEL and the Porter analysis provide a structured way of establishing the opportunities and threat components of the SWOT.  So, unwittingly, we’ve always used the model as he originally intended! Phew!

The model and what it achieves

The model is an amalgamation of economic thinking applied to the corporate world and is useful in helping companies understand their immediate competitive environment.  The 5 forces dictate the competitive intensity and therefore the attractiveness (or otherwise) of a sector in terms of its profitability.  The more “squeezed” the company is by these five forces the less attractive (read profitable) the sector is likely to be.  The influences that the company can exert are thing like; taking over competitors, buying key components of the supply chain and even buying customers.  It’s time consuming, its expensive but it can completely change the competitive environment.

Let’s now take a peek at each of the components of the model in turn:

For most companies the intensity of competitive rivalry is the major determinant of competitiveness. Essentially, we are asking the question;

“how cut throat is the industry; is it hospitable or hostile?”  Having an understanding of the competition is critical to successfully growing a company, all companies should be aware of their competitors, their marketing and pricing strategy and they should react to any changes made.

Other factors that affect competitive rivalry include:

Industries that deliver high returns for the players within it will inevitably (read unfortunately) attract new firms into that market; over the longer term the impact of which will be to decrease profitability for the incumbent firms within the sector.  As a result, the higher the “barriers to entry” for new players the longer the existing players can continue to make those high returns.

Other factors that affect the threats new entrants may pose include:

Substitute products will usually use a different approach or technology to solve the same customer requirement.  At a basic level think; beer and wine, (not sure why that occurred to me first!); butter or margarine; meat or fish; landlines or mobiles; cars, planes, trains and ships; and so on. Taking a purist approach, it’s worth thinking hard about this; water is a substitute for Coke, but Pepsi, because it’s essentially the same (sorry, but it is) is not a substitute product but a competitive product. If we increased the marketing spend for water it could conceivably “shrink the pie” for both the Coke and Pepsi [1] products.

However, if we increased the Pepsi advertising spend it would be more likely “grow the pie” and deliver Pepsi a larger market share at Coke’s expense, but in doing so increase consumption of all soft drinks.

Having said that, we are not interested in a purist approach and getting things in the right box…we are interested in using these tools and techniques to drive creative thinking about your business.

Other factors that affect the threats from substitute products include:

The bargaining power of customers is about the ability of the customer base to put your company under pressure, which also affects the customer’s sensitivity to price changes. The customers power is high if they have numerous alternatives and low if they only have a few.  The loyalty programmes noted above are mechanisms that companies use to reduce customer power. You don’t really want to buy your coffee from Starbucks if you have a Costa card.

Factors that affect the bargaining power of customers include:

The bargaining power of suppliers is the inverse of that of customers; this time, it is about the ability of the supply chain to put you under pressure.

If you are building houses and there is only one company that sells bricks, you have no alternative but to buy bricks from them. Suppliers may refuse to work with the firm or charge excessively high prices for their unique resources.  The bargaining power of suppliers is high when there are few substitute products and low when there are many.

Factors affecting the bargaining power of suppliers include:

Porters model is useful to assess the competitive environment a company operates within to identify change to any of the above forces that may require a company to re-assess the market place and its position within it.

How to use the tool

When we are undertaking this sort of work we normally start with a team of people, usually the top team but often significant others, and we brainstorm the PESTEL issues first.  Once we have brainstormed those, we’ll take a break and then brainstorm the PORTER issues.

However, you can set it up so that, initially, everyone does their thinking individually and then brings notes to the table for the brainstorming session.

Tools that PESTEL can be used in conjunction with, or the results from which feed into, include: