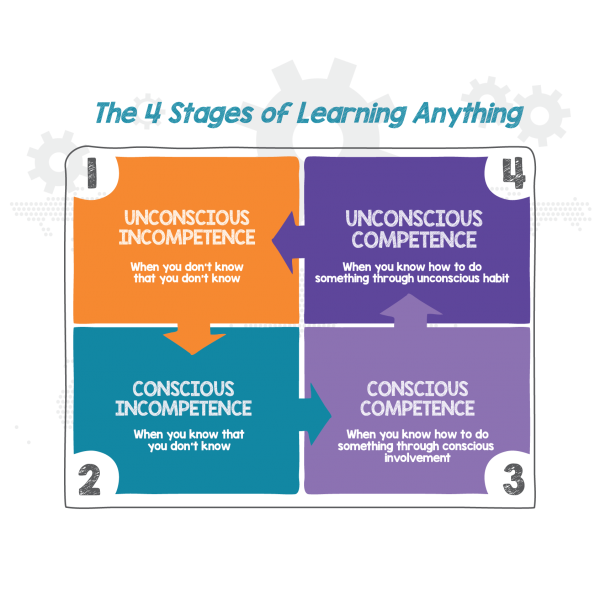 The conscious competence model of learning

The conscious competence, four stages of competence, learning model is a model which relates to the psychological states involved in the process of developing any new skill.

The model is often, although incorrectly, attributed to Abraham Maslow.  He’s the guy that came up with The Hierarchy of Needs, which will be the subject of a later blog.  However, it’s perhaps more likely that a guy called Martin M. Broadwell developed it as he described “the four levels of teaching” in a paper called Teaching for Learning in February 1969.

The four stages relate to an awareness throughout the process of developing a skill and suggests that people are initially unaware of how little they know, or, they are unconscious of their incompetence. In the beginning, they are unaware that they don’t have the skill.  As they recognise their incompetence, they consciously acquire a skill, then consciously use it. Eventually, if you become good enough, skills can be deployed instinctively.  At this stage you are said to have become unconsciously competent.

At this level, you are blissfully ignorant: you have a complete lack of knowledge and skills in a specific area and …you’re unaware of this.  You do not understand or know how to do something and so do not actually recognise the deficit. Indeed, you may even deny the usefulness of the skill. At this early stage you need to recognise both your own incompetence and the value of the new skill to you before moving on to the next stage. The length of time you are likely to spend at this stage will largely depend on the value you place on the skill and therefore the strength of the stimulus to learn. In the example of driving, a small child may not even be aware of that they cannot drive!

At some point as a child you become conscious that you do not know how to do something; drive a car, however, at this stage 1) you now know you don’t know and 2) you also appreciate the value of the new skill so the desire to learn has been, or is about to be, overcome.  As the lessons take place gears will be crunched, clutches will be slipped and you may even kangaroo down the road.  Initially, especially if you are anything like me, you will be fully conscious of your incompetence.  Not getting things right is absolutely integral to the learning process at this stage.

You are now grasping the basics…at this stage, you now know how to undertake the task in hand, but it still requires a great deal of concentration and the process may be pretty clunky.   Taking the driving example, you can now propel the car and get from A to B, but it still makes your brain hurt (there is still heavy conscious involvement) and it’s not yet “second nature”.  So, you have probably not passed your test yet!

The conscious competence model is about learning and growth

This is the stage where the skill is now ingrained, it is now so practised it has become “second nature” and can be performed easily and without thought.  Competence is now completely unconscious.  You can now drive, you intuitively know when to change gear and can do so whilst chatting to your passenger.  Additionally, at this stage, the skill may be so ingrained that you may well be able to teach it to others.  In fact, a good way of properly embedding and developing the skill is actually to teach it to others.

Whilst we’ve used the example of driving able the model can be applied to any new skill from learning how to plan to using simple software packages like Word or Excel.

The conscious competence model is useful in a number of ways.

It is useful as a model to understand your own emotions, as you progress through the learning process.  It can help to you to stay motivated when, as part of learning, times get tough.  As a result, it helps manage expectations of success, so that you don’t try to achieve too much, too soon.

It can also be used as a “prop”, for example, during the consciously unskilled phase, you can reassure yourself that, while learning a new skill is difficult and frustrating right now, things will improve in the future.  Additionally, when you’re unconsciously skilled, the model acts as a reminder of the value of the skills that you’ve gained…and (perhaps) not to be too impatient with people who have yet to master them!

The model is also very useful in coaching and training situations as it allows you to be in touch with what your people are thinking and feeling. You can then help them understand their emotions as they learn new skills, and encourage them when they’re feeling disillusioned.